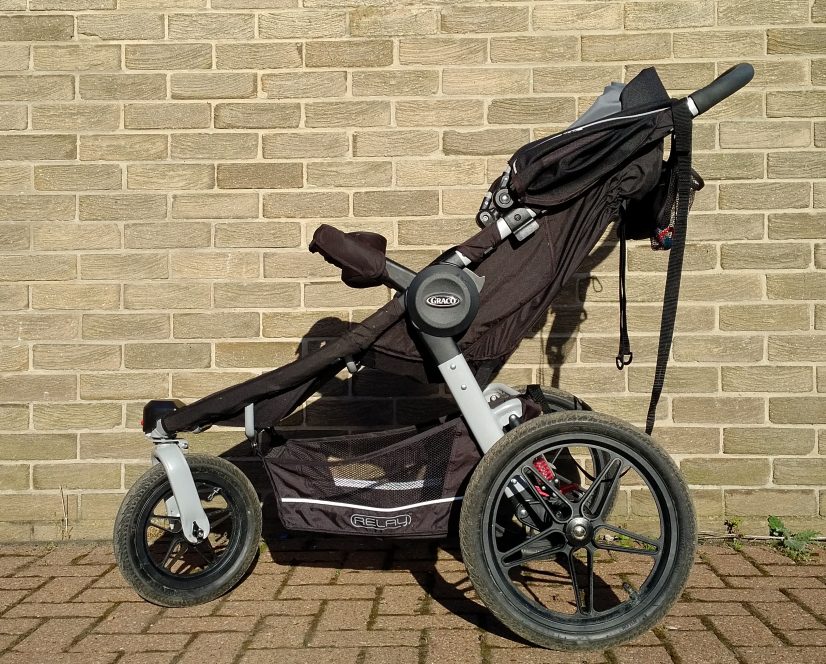 I picked up my Graco Relay Jogger in the middle of 2016 – and have been running with it ever since, now feels like the right time to write about it and share my thoughts/experiences using this pushchair for running.

So what is the Graco Relay Jogger Pushchair and what do I think since purchase?

Being a Dad who runs, it’s hard to fit runs in when your dear daughter and your wife attend dance lessons over the weekend. With baby Joe getting past 12 months I decided to give a running buggy some serious consideration as I wasn’t getting the miles in that I wanted. We were sitting in the house when we could be out having adventures in running.

I have already covered off my motivations for buying this pushchair in another post so I will get on with a write up about the pushchair I use!

When the Relay arrived in its MASSIVE box you can’t help but think there is no chance this thing is going to fit anywhere. That is until you open the box and get everything out and appreciate how much packaging is used.

In the box you will find the pushchair base with the front wheel attached, 2x rear wheels, a snap-on sun canopy, a lap bar with drinks holder, a parent organiser for a drink and your phone/keys etc. and lastly a rain cover. 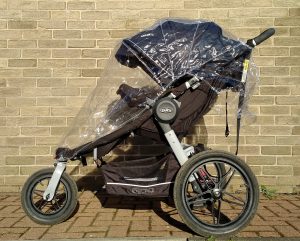 After a quick glance at the manual, I had this thing assembled in no time at all. I clicked on the rear wheels, snapped on the canopy and lap bar and with 2x bits of Velcro the parent organiser was attached. Done and dusted? Well no not really, the tyres needed air in them so I wheeled it out to the car where I have an electric air compressor. I filled the big back wheels easily but I struggled to get my air hose on the valve of the smaller front wheel due to the size of the spoke gaps. To get around this minor inconvenience I picked up one of those bent valve adapters 🙂

Drink holder for the little one

With the tyres filled we were ready for a little test drive before hitting parkrun the coming Saturday. I strapped young Joe into the 5 point harness, locked up the front wheel and set off …for a walk …as I suddenly got the sense of stage fright and felt a bit stupid in my running kit about to start pushing my young man about at pace. So we continued our stroll, convincing myself this is a warmup till we get away from kerbs and road crossings to run on the local cycle path. 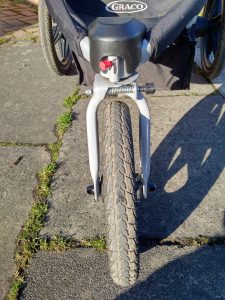 As we got closer, the walk picked up to a jog and a jog to a run, now we were running! So my first impressions of the Relay at the point was that I didn’t really notice the pushchair but once I got moving properly it felt weird. It wasn’t too light or too heavy either but it did feel sturdy. We tested going over bumps and light cornering and it was all starting to fall into place how to control this. We decided not to spoil ourselves and keep a proper run for parkrun. 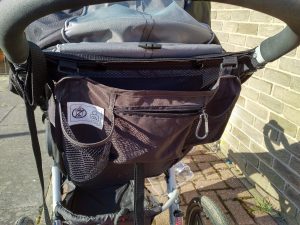 A place for your drink, phone and stuff

When I got home and let Joe out to play, I thought it would be a good idea to practice getting the buggy into my VW Golf. Not the biggest boot in the world but I knew this thing folded with the pull of handle and it does indeed do that with great ease! However even when fully folded and laid on its side in my boot it is too big to close the boot properly. Luckily the Relay has 2x quick release wheels which you just push a button and out they come. With the wheels off and stored to the side it all fitted in the car. I really like the easy assembly and disassembly of this pushchair! 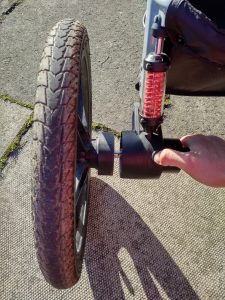 Two days later we went to parkrun.  While this is a review at its heart, I can’t really avoid writing about running with the buggy so here goes and I will try to round off with some more product information …(I did say I would try).  We set off at a reasonable pace and I found light cornering very easy, you just apply weight/force to the right of the handle to go left and the opposite to go right. So far so good, until you hit more severe corners and you have to grab the handle with both hands and push down to lift the front wheel, you can then take a 90 degree turn easily! You do find that running on flat and uphill is no bother at all.  What you don’t really consider at the time is the downhill. I deliberately decided to get the Relay which I knew didn’t have a handbrake and it is certainly noticeable on the downhills. You really only have two choices, you either slow yourself down and take the strain of the buggy or run with it when the pace picks up (I prefer to run faster and not fight it).

What I can tell you about the Relay after our first parkrun is that it’s sturdy and the tyres/suspension really take the bumps out of the ride for your tiny companion. You will get asked many, many, times by runners if they can jump in for a lift around! 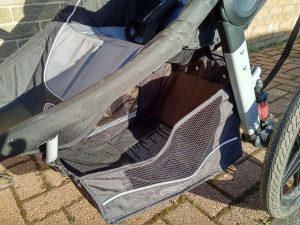 I personally think it’s a great running pushchair, but unfortunately Graco don’t seem to agree with me. A lot of my initial research took me to sites in the USA which pushed the running aspect heavily and even included a wrist tether to stop you losing control if you trip/fall. This is not featured in the UK version, which is a shame as it does give you a little peace of mind when you don’t know the route you are on. I picked up one elsewhere and it was easily fitted. 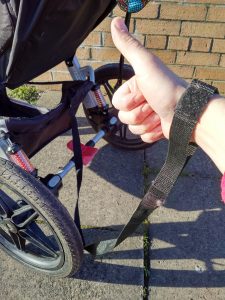 Should this put you off? Well that’s your decision really. I decided to stick with my gut on this product after reading up on it quite a lot. Graco really should reconsider this stance as I would imagine they would sell well to runners.

Things to consider going forward: well we enjoy parkrun; it does feature different terrains and is in my local area. I decided to invest in some inner tube slime to stop thorns etc. ruining our day and so far we have not had a puncture! I also bought some plastic barcode tags which remain attached to the chair so I never forget them.

The handle bar is not adjustable which could be a deal breaker for some, not me though as for my height it’s perfect as it is.

On balance the Graco is a sound purchase and we use it daily for the school trip and for running; it caters for our needs perfectly with just one chair. 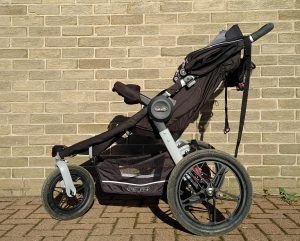